In the Frame for September 2010: envelope inscription

This month one of our museum volunteers has chosen to highlight not a painting in the Archives & Museum’s collections, but an envelope inscribed in black ink by William (or Lillian) Angus, a patient of Berkshire Mental Hospital in Wallingford. The envelope is addressed to ‘Central Board Visitor’ and dated, ‘21/6/46’. Our volunteer writes:

“At first glance the envelope, like the six page letter inside it, appears to be a combination of word strings of unfathomable meaning and characters that are actually undecipherable – it is even difficult to say whether its author was named ‘Lillian’ or ‘William’. Yet a sense of intense urgency and anxiety hangs over this communication. The words of the addressee were first written in pencil and then overwritten in ink, as was the ‘Strictly Personal’ stricture. The words ‘Jesus’ and ‘Bible’ also appear on the envelope, within sentences that may continue the account contained in the enclosed letter, or may constitute the writer’s afterthoughts once the letter had been sealed. In any event, the writer wanted there to be no mistake about the letter’s destination or the importance of its contents.

“The envelope (and enclosed letter) evokes an acute sense of organised necessity within a disorder that is otherwise apparently unrestrained. The presumed failure of the writer’s intentions gives it a poignancy which is almost unbearable. Did it ever reach its intended destination? If so, did its recipient take pains in attempting to read and understand it to match those of the writer in its composition? What response (if any) was made? We do not know. This item simply came into the Archives & Museum’s collections via Drs. Guttman and Maclay, the two Maudsley doctors responsible for mescaline experiments, the results of which are currently featured in the Bethlem Gallery’s Phantasmagoria exhibition. We cannot say how and why it came to them. Can we say, perhaps, that the intended communication has not utterly failed, given its continued survival and accessibility within our collections?” 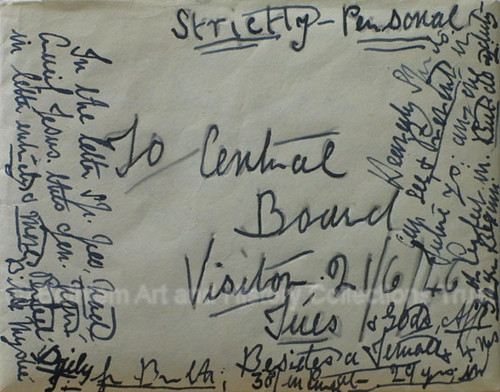 in the frame guttman and maclay berkshire mental hospital

This week, a new exhibition of paintings, drawings and sculpture by Peter Rowbotham opened at the Bethlem Gallery. Peter lives and works in Croydon...

A new exhibition is now open at the Bethlem Gallery, the result of a project led by artist Mark McGowan, and involving patients, staff, volunteers...