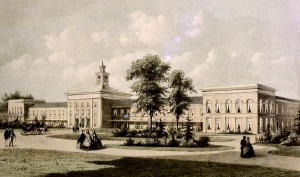 In 1841 a national law was introduced which required the state governments of the Netherlands to provide adequate healthcare for the mentally insane. Most state governments chose to comply by improving existing institutuions. However, the state of Noord-Holland decided to build a new institution, designed specifically for this purpose. A location in the countryside was chosen: the Meer (lake) en Berg (hill) estate. Work on the institution started in 1846, and in 1849 the institution was able to open its doors. J. D. Zocher Jr., a renowned architect, was involved in the building project, designing the neoclassical building and its surrounding gardens.

The interior was originally designed according to principles laid down by the eminent Dutch psychiatrist Schroeder van der Kolk, and in anticipation of a patient population of 300 patients. (In fact the number of patients in residence at Meerenberg exceeded this number shortly after its opening.). All rooms were reached through one of four corridors surrounding a courtyard. The building was divided into different wards based on patient gender, social position, class and diagnosis. It contained a pharmacy and also a hydrotherapy unit which was equipped with baths and showers.

The first medical superintendent of Meerenberg was Dr Bernard Everts. Everts was a proponent of the theories of moral management and non-restraint which he had encountered while visiting a number of asylums in England and Scotland in 1848, and tried to implement policies of non-restraint at Meerenberg from the outset. As the building was progressively enlarged to make room for more patients throughout the 1850s, Everts ensured that smaller wards were created, and prevented the building of a detached cell-block.

Meerenberg was the Netherlands’ first (and until 1884 the only) modern healthcare institution specifically built for the care for the mentally ill. This made it a model institution not only in the Netherlands, but also abroad. The institution continued to be enlarged on numerous occasions; until in the 1930s it housed around 1500 patients. Parts of the original building were subsequently demolished, but the main building survived the closure of the hospital in 2002, and was appointed a national monument in 2004. Its likely future is to be preserved as part of a new housing development.