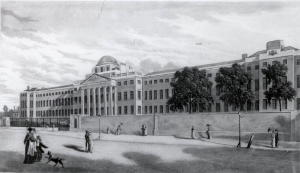 The priory of St Mary of Bethlehem was founded in Bishopsgate (near the present site of Liverpool Street Station) in 1247 by Simon Fitzmary, an alderman and former sheriff of the City of London. The names ‘Bethlem’ and ‘Bedlam’, by which it came to be known, are early variants of ‘Bethlehem’. It is first referred to as a hospital for ‘insane’ patients in 1403, after which it has a continuous history of caring for people with mental distress.

In 1547, King Henry VIII ceded the governance of Bethlem to the City of London, thus placing it among the City’s five Royal Hospitals (the others being St Bartholomew’s, St Thomas’, Christ’s and Bridewell). From the 1570s until the introduction of the National Health Service in 1948, Bethlem was administered jointly with Bridewell (which now administers King Edward’s School at Witley, in Surrey) by a Board of Governors, on which (along with many others) Daniel Hack Tuke served in the last quarter of the nineteenth century.

Over the course of its history Bethlem developed a commitment to treatment of patients with acute, rather than chronic, conditions. This was reflected in its admission criteria, which excluded patients with unfavourable prognoses, and in its policy of discharging almost all patients who had remained ‘uncured’ after a year in the hospital. In 1852, following the departure of its last visiting physicians (Alexander Morison and Edward Thomas Monro) and the appointment of its first resident physician (Charles Hood), the hospital unreservedly adopted policies of non-restraint and moral management of patients. A countryside convalescent unit was established in 1870, and an outpatient clinic for voluntary patients - the first in the United Kingdom - was opened in 1919.

The hospital has relocated three times, first to Moorfields in 1676 (the present site of Finsbury Circus), then to St George’s Fields in 1815 (the present site of the Imperial War Museum) and finally to Beckenham, Kent in 1930, the site of a former country house estate. In July 1948, upon the introduction of the National Health Service, Bethlem was united administratively with the Maudsley Hospital to form a single postgraduate psychiatric teaching hospital. In 1999, Bethlem and Maudsley were merged with other South London mental health services to form the South London and Maudsley NHS Trust.