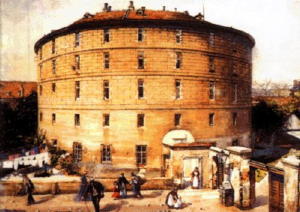 The Narrenturm was a circular, five-storey tower. It was constructed at the same time as the general hospital itself on the command of the Austrian emperor Joseph II, built to the designs of Josef von Quarin, and opened on 19 April 1784. On the strength of this facility Joseph II is credited as one of the first to have brought psychiatric patients ‘up from the basement’, as it were. The aim of the Narrenturm was not so much treatment of its patient population, but rather protection of the general population from them. From 1803 onwards, patients were subjected to an assessment concerning the danger they posed to themselves and others, their ability to care for themselves, the threat of escape and the possibility of cure. They were then classified as either ‘better’ or ‘worse’ in these terms, and only patients considered ‘worse’ were admitted to the Narrenturm thereafter.

The round tower consisted of five floors, with twenty-eight cells each (except for the ground floor, which contained twenty-seven), around a diametrical hallway. At any one time, between 200 and 270 people lived in these 139 cells. Despite recurring criticism of the building’s layout and design, hardly any adjustments were made. From 1795 onwards ‘quiet’ patients were allowed to wander in one of two specially designated gardens (one for women and one for men). In addition some of them were permitted to write, draw, paint or use a spinning wheel.

In 1839, Michael Viszánik became the first psychiatrist employed in the Narrenturm. In 1845 he described its living and working conditions. Each cell was approximately 2.8 metres high, 3.5 metres long and 3.2 metres wide. The barred holes in the floor which had served as latrines had been replaced by bedpans. The barred windows remained in place. Cell floors slanted towards the door, allowing for the ready removal of urine and water. Patients slept either on sturdy beds or on a pile of straw if ‘dirty’. Straitjackets, belts, foot- and handcuffs were used to restrain patients. A form of heating was in use, but only since 1827. Between 1829 and 1843, more than 26% of patients suffered from ‘ecstasy’, 18% from ‘paranoia’, 18% from ‘anoia’, 12% from ‘melancholy’, 5% from ‘delirium tremens potatorum’ and 5% from ‘epilepsy’.