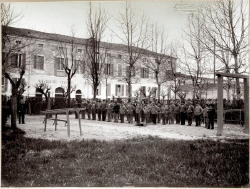 The Ospedale San Lazzaro is one of the oldest institutions in Italy. The date of its foundation is unknown, but by 1178 it was caring for lepers, in 1348 it was treating plague victims and in 1536 its first psychiatric patients were admitted. The city’s provision for the sick, the poor, the homeless and the mentally ill was centralised at the Ospedale San Lazzaro in 1754.

In 1821, Duca Francesco IV d’Este issued a set of reforming decrees in relation to San Lazzaro, and sent the institution’s superintendent, Dr Galloni, on a tour of Italian mental institutions (such as Lucca, Florence and Aversa) which had embraced the reformist ideals of Tuke in Britain, Pinel in France, Reil in Germany and Daquin in Savoy. Upon his return, Galloni implemented a series of thoroughgoing changes, based on the principles of the moral management of psychiatric patients and instituting a methodical system of labour, discipline, punishments and rewards. This approach was geared to assist patients to modify and develop their behaviour, and thereby gain more freedom (e.g. permission to visit the local village, take part in physical exercise, drama, dance etc.) Dr Galloni remained superintendent of the hospital until 1855, and the famous Carlo Livi became superintendent in 1873, two others having held the post in the intervening years. Fresh from his fifteen years as head of Siena’s Ospedale San Niccolò, Livi established a farming colony at San Lazzaro and the institution became partially self-supporting.

In 1874, the Ospedale San Lazzaro began to collaborate with Modena University, in 1875 the first issue of the psychiatric journal ‘Rivista Sperimentale di Freniatria e Medicina legale delle Alienazioni Mentali’ was published under Livi’s editorship. The hospital is now closed, and the building houses the Centro di Documentazione di storia della psichiatria ‘San Lazzaro’, a museum and the Carlo Livi library.