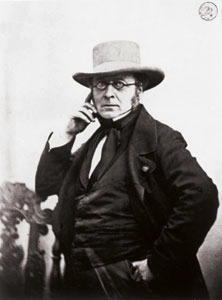 Joseph Guislain was born in Ghent on 2 February 1797. Though part of a leading family of architects, he chose to study medicine and attended the Ecole de Médicine in Paris. There he proved himself a brilliant student, winning several academic prizes, before returning to Ghent to complete his studies at the newly-established Ghent University, Guislain took his Doctor of Medicine degree in 1819.

The original source of Guislain’s interest in the mentally ill is uncertain. In the early nineteenth century, Ghent had two madhouses, namely the Manweeshuys in the Geraard de Duivelsteen and the Vrouwenweeshuys or Hospice nr. 8 near Zandpoort or Zottepoort (Fools’ Gate). Patients at these institutions were kept in degrading conditions and treated almost as prisoners until Petrus Jozef Triest, founder of the Brothers of Charity, introduced better and more organized forms of care.

In 1818, a royal decree was issued by William I to prompt reform in the system of mental health care. Three years later, the Provinciale Commissie van Geneeskunde onderzoek en toevoorzigt (Provincial Board of Medicinal Research and Supervision) launched a competition to find better methods of treating the insane. Guislain entered and won the competition, and was invited to publish his research work, which he did in 1826 under the title Traité sur l’Aliénation mentale et les Hospices des aliénés. It was probably this work which introduces Guislain to Canon Triest.

In 1828, Guislain was appointed senior doctor in the mental institutions over which Triest had charge. In the following year, Guislain and Triest drew up the internal rules and regulations of these institutions. These are the first of their kind, prescribing a dignified and therapeutically sound way to treat the patients. In 1835, Guislain is appointed professor of physiology at Ghent University, a post he held concurrently with his medical duties.

In 1850, Guislain and Edouard Ducpétiaux lay the foundations of the law on the care of the mentally ill for the young Belgian state. Untill 1991, their work remained the legal basis for the care of mental patients in Belgium.

Meanwhile, Guislain began to develop plans for a new purpose-built institution for mental patients. To advance these plans, he travelled Europe information-gathering from colleagues, and for a time became a member of Ghent’s local council, where he defended his ideas concerning the care of the mentally ill and the construction of a new asylum. In 1852, Guislain’s plans were accepted by the council, and by 1857 a new institution, built to Guislain’s design, was brought into use.

Guislain died in Ghent on 1 April 1860 of an incarcerated hernia, and was buried at Campo Sancto in St. Amandsberg. A bust of him was unveiled in the Begijnhoflaan in Ghent in 1887.