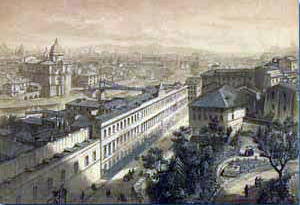 The antecedents of Santa Maria della Pietà alla Lungara date back to 1548. It was moved to Via della Lungara, next to the Ospedale Santo Spirito, at the behest of Pope Benedict XIII in 1725, and built to the designs of Filippo Raguzzini, with two symmetric blocks, one for male psychiatric patients and one for female, and a façade 114 metres in length. At the end of the eighteenth and beginning of the nineteenth centuries, additions were made to the building by the architect Giovanni Batista Moneti. The hospital was the subject of a damning official report in 1824, and in 1849 it (along with all of Rome’s hospitals) was further criticised by a visitation commission headed by Cardinal Morichini. This negative attention finally resulted in the drawing up of municipal rules on the care for the mentally ill in 1858, among which was the stipulation that patients should be categorised as calm, agitated or suicidal, and treated according to their diagnosis. The buildings of the hospital were restored in 1859/1860.

After the floods that struck Rome in 1856, a new outpost of the hospital, Il Manicomio Villaggio in Giancolo at the Viale Prelà, was opened. Built on a villa system to the designs of Francesco Azzuri (who had made fact-finding visits to many of Europe’s psychiatric institutions), and offering three separate classes of treatment, it was reminiscent of the Belgian village of Geel in the mental healthcare it offered. A garden and other green environments were contained within it. Patients at Giancolo were able to choose whether to engage in manual labour or simply stroll in the shade, and were treated separately according to diagnosis.

A new thousand-bed provincial institution to replace Santa Maria della Pietà alla Lungara was built at S. Onofrio (Monte Mario) in 1907. Between 1913 and 1924, patients were moved from the old hospital to the new, which was thereafter dubbed Ospedale Provinciale di S. Maria della Pietà. The hospital at Via della Lungara was restored in 1859/1860 and now accommodates Il Museo Laboratorio delle Mente, the most important psychiatric archive facility in Italy, and the Biblioteca Scientifica ‘Alberto Cencelli’.